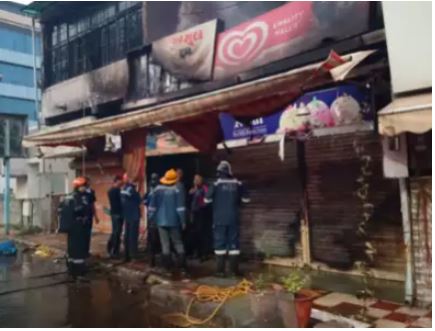 Fire that broke out at a shop in Navrangpura area of Ahmedabad has been brought under control. (Photo: ANI)

AHMEDABAD: A fire broke out in three shops located in a building in Ahmedabad’s Naranpura locality on Wednesday morning, a fire official said.

Eight people were rescued from the premises, he said.

The blaze erupted around 6.30am in the shops located on the ground floor of the three-storey building, he said.

There are residential apartments on the top two floors of the building and smoke entered the flats following the fire on the ground floor, Ahmedabad’s acting chief fire officer Rajesh Bhatt said.

“Eight people, including four women, trapped in the apartments of the building were rescued,” he said, adding that no casualties were reported.

The fire was brought under control after a couple of hours, the official said.

The cause of the blaze was not immediately known, he said.

Web Source: The times of india