20210205 Major fire at scrap godown in Mumbai’s Mankhurd, none injured

Major fire at scrap godown in Mumbai’s Mankhurd, none injured 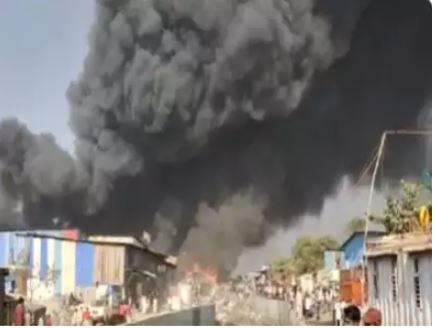 The incident occurred in Mandala area around 2.45 pm

MUMBAI: A major fire broke out at a scrap godown in suburban Mankhurd here on Friday, but there was no report of any injury to anyone so far, officials said.

The incident occurred in Mandala area around 2.45pm, they said.

“The blaze erupted in a scrap material godown. It is a ‘level-3’ (major) fire. Eleven fire engines and as many tankers are currently engaged in the firefighting operation,” a fire brigade official said.

“There is no report of injury to anyone so far,” he said, adding that the cause of the fire is being ascertained.