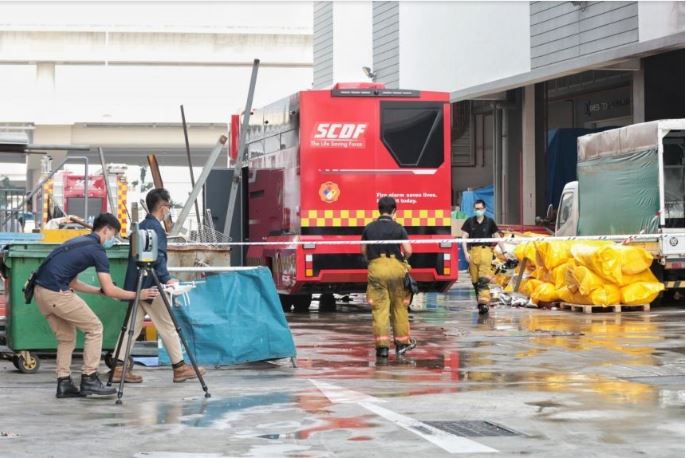 The explosion was caused by the accumulation of potato starch in a confined environment.PHOTO: SHIN MIN DAILY NEWS

SINGAPORE – Three workers have died and five remain in critical condition after the explosion on Wednesday (Feb 24) in Tuas.

Two other workers, who were in the unit across from the accident site at 32E Tuas Avenue 11, have been discharged.

The Ministry of Manpower (MOM) provided the updates at the site of the incident on Thursday.

The explosion had occurred on the premises of Stars Engrg, a contractor dealing with fire protection systems. It forced the evacuation of 65 others in the vicinity of the blaze, and these workers – some of whom lived in the dormitories at the site – have been rehoused.

MOM said the three dead workers have not been identified, given the extensive burns they suffered.

The authorities will inform their families once their identities are confirmed.

MOM’s preliminary investigations found that the explosion was caused by the accumulation of potato starch in a confined environment.

Contact with a source of ignition can cause what is called a combustible dust explosion.

Mr Silas Sng, commissioner for Workplace Safety and Health, said MOM had issued guidance material after a similar explosion years earlier. He added: “It is a known scientific fact that materials in powder form can be explosive when it is dispersed in the air in an enclosed environment.

“Potato starch is one of the materials that this particular company used for its product. Over time, the dust can accumulate, especially if the ventilation housekeeping is inadequate.”

He called on other companies dealing with similar materials to review their safety measures so that it does not recur.

“We must do all we can to prevent the further loss of life,” said Mr Sng, who is also MOM’s divisional director of occupational safety and health.

The latest deaths take the number of workplace fatalities recorded in the first three weeks of February to 10.

This is compared with the 30 workplace deaths recorded in the whole of last year.

The chairman of the Workplace Safety and Health Council John Ng called for all companies to address the alarming trend by taking a safety time out, whether lasting half a day or a full day.

This is a recommendation that will allow for a review of their safety processes with workers and to facilitate checks on the state of their machinery.

NTUC assistant secretary-general Melvin Yong, who was also at the site on Thursday, called for a dedicated workplace safety and health monitor at each worksite, who will be much more effective than the inspections conducted by MOM now.

He said: “There’s only so many inspections that we can do. I have repeated many times and I will continue to call for it, that every organisation should have a mandatory, a dedicated workplace safety and health representative.

“That is something that the union has been advocating, at least in recent years, and multiple times. Today only very selected sectors have that as a requirement.”

Mr Yong said the Migrant Workers’ Centre and the union are working with the affected workers’ employers to render all who were in the accident the required support.