Fire destroys over 400 tonnes of cloth 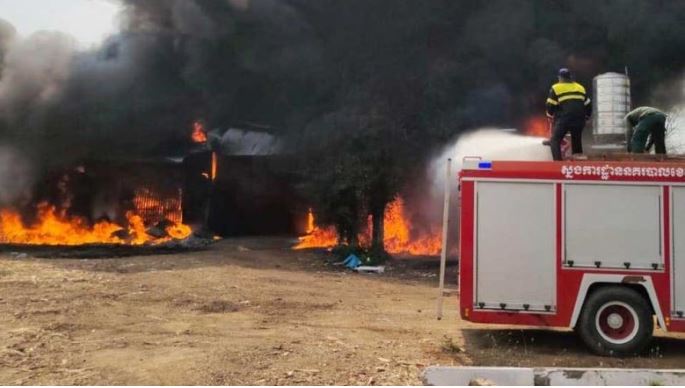 Authorities are investigating the cause of a fire that completely destroyed more than 400 tonnes of cloth being stored at a warehouse in Andong Chroah village in Ampil commune of Kampong Cham province’s Kampong Siem district on the afternoon of February 27.

District police chief Ek Van Dorn said the warehouse was 30m by 40m by 6m high and was constructed of brick and zinc.

The warehouse is owned by Ra Vuth, 42, a businessman living in Phnom Penh, who was using it to store cloth.

“The warehouse contained 400 tonnes of cloth and some other materials that were damaged by the fire. The damaged property was worth over $200,000,” Van Dorn said, adding that no one was injured or killed in the blaze.

Yorn Din, chief of the provincial police’s Fire Prevention and Rescue bureau, said too much cloth was being stored in the warehouse and that the intensity of the fire and the noxious fumes emanating from it made it difficult for the police and firefighters to intervene.

“About 150 firefighters and police officers from many units worked together to put out the fire and it took them over seven hours to get it under control,” he said.

Din added that they had also used an excavator to dig a fire-break trench around the warehouse to stop it from spreading to nearby homes.

He said 11 fire engines containing 495 cubic metres of water had been engaged in the firefighting efforts.